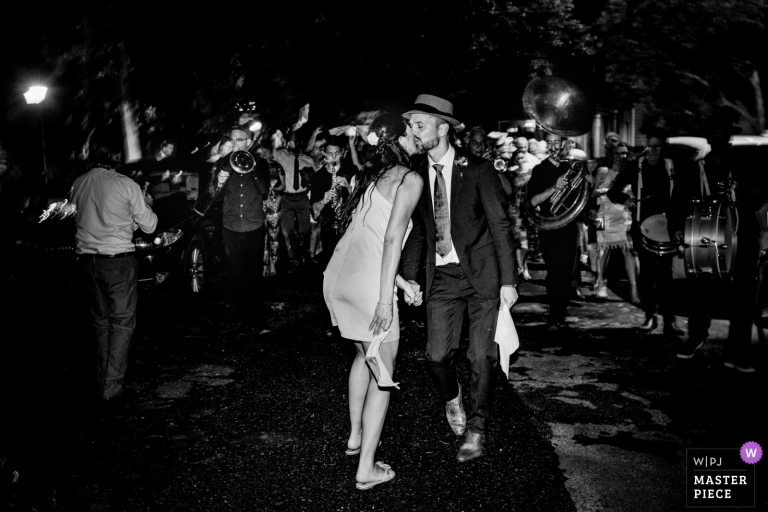 I was going to blog something else today,  this was going to be about a recent wedding at Colehayes Park in Devon, not destination wedding photography but then this happened and so I’ve decided to post the wedding tomorrow and post this one instead today. So what’s ‘this’? An award, from the WPJA (Wedding Photojournalists Association). I’ve received awards from them before and written about who they are and what they’re about. If awards mean anything to you, you can see my other awards from them amongst others on the wedding photography awards page.

What I want to tell you about instead is the picture and how it came to be.  This image is from Frank and Romy’s wedding in New Orleans back in July. It’s from the later part of the evening, after the ceremony and the reception. The wedding party headed back to a private house for an after-party party.  Now I’ve been to an after-party or two in my time but never quite like this. As the main reception came to an end a klezmer band arrived at the venue and, with Frank and Romy at the head of the procession led the guests back through the streets of the Garden District in New Orleans to the house where the after party was set up. Police motorcycle outriders closed the streets along the route to allow the procession to pass. So here we see Frank and Romy leading the procession away from Felicity Church to the party, the band behind them belting out some traditional tunes and the guests following along.

So thanks go to the WPJA judges for this award, and of course to Frank and Romy for having me along on the day and introducing me to stuff that I’ve never seen before like the second line parade in the picture here.  If you’re getting married and looking for a photographer, whether your wedding is in the UK or whether you’re planning a destination wedding then get in touch if you like the look of my work and we can have chat about it all.